A More Precise, Effective Option for Treatment of Recurrent Squamous Cell Carcinoma of the Lung

Following a diagnosis of early stage squamous cell carcinoma of the left upper lobe, a 72-year-old male was referred by his local physician to Winship Cancer Institute of Emory University. He received Stereotactic Body Radiation Therapy (SBRT) at his local radiation oncology facility, 50 Gy dosage given in five fractions. A follow-up PET-CT revealed a suspicious area within the prior radiation volume, and a biopsy confirmed T2bNO squamous cell carcinoma in this location. 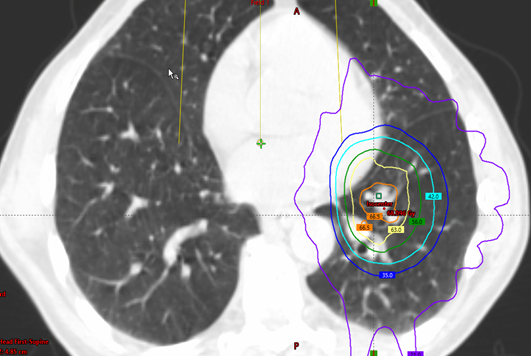 Prior SBRT plan for patient

After completing radiation, he was seen by a local medical oncologist, who recommended maintenance immunotherapy. The patient refused. He delayed further follow-up for two years.

Upon following up to speak with his physician in November 2019, he agreed to a follow-up PET-CT. The scan showed persistent disease in the recurrent left lung cancer and no evidence of metastatic disease elsewhere in the body. At that time, he agreed to see a Winship radiation oncologist for consideration of re-irradiation. 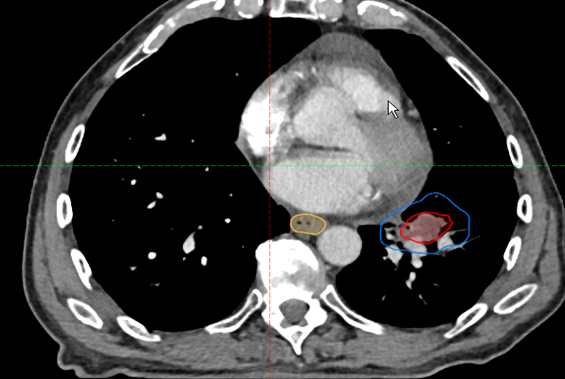 The Applicability of Re-Irradiation with Proton Therapy

If the patient’s delay in follow-up was because he believed that any systemic therapy in his case would not be considered curative, he was correct. Systemic chemotherapy or immunotherapy is important, but not curative in lung cancer. Without re-irradiation, he faced certain death and catastrophic symptoms stemming from the location of his unchecked recurrent disease. Based on new literature reported over the past five years, the availability of proton beam radiation at leading cancer centers has shown to be effective at local control of recurrent disease.

Many factors play into the success of proton beam re-irradiation, including the cancers inherent sensitivity to radiation therapy, tumor volume and location. In cases like his, with isolated lung cancer recurrence confined to a lung mass +/- adjacent lymph nodes, proton radiation can eradicate recurrent disease while avoiding or minimizing exposure to nearby organs, resulting in improved survival.

Given the placement of this patient’s recurrent tumor in the left lung, proton therapy was the better option, compared to standard photon radiation, because of its ability to avoid nearby critical organs. His prior SBRT did not include the esophagus but it did irradiate the left main stem bronchus, the left pulmonary vasculature and a portion of the heart. Additional irradiation to these nearby normal tissues could have been damaging and is best avoided altogether.

A personalized plan was created for the patient at Emory Proton Therapy Center assuring that the proton radiation dose would precisely match the shape of the target. The use of cone-beam CT technology on the proton gantry allowed precise positioning of the patient as well as monitoring for any changes in the patient or the tumor itself that would necessitate changes in the treatment plan. 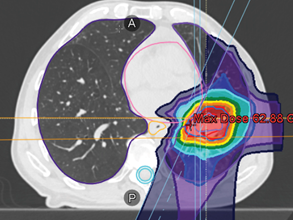 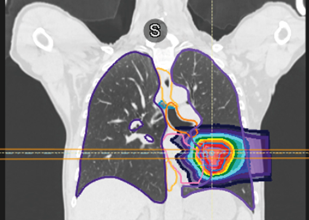 He began proton therapy and received 45 Gy in 15 daily sessions. Post proton therapy, the patient received follow-up care from radiation oncologists to monitor the status of his cancer.

At Winship Cancer Institute of Emory University and Emory Proton Therapy Center, our teams of researchers and physician-scientists are transforming the way each patient’s unique cancer is detected, diagnosed, treated and survived. With more than 500 cancer researchers and sub-specialized physicians, we provide you and your patients access to hundreds of clinical trials, some available nowhere else in the world. And, our discoveries and breakthroughs in proton therapies and other treatments are leading to better outcomes, more options, faster responses, fewer side effects and better quality of life.

Expertise in Proton Therapy for Your Patient

As the only proton therapy center in the state of Georgia, we specialize in the most advanced radiation technologies and treatments for patients with specific cancers. We are an integral part of Winship Cancer Institute of Emory University, a National Cancer Institute-Designated Comprehensive Cancer Center. Together, our teams of world-renowned experts deliver the most effective treatments and achieve the best outcomes for your patients.

To refer a patient, call 1-833-3PROTON (377-6866) or complete a referral form at
emoryhealthcare.org/protonreferral.

Emory Proton Therapy Center is committed to the continued health and safety of all patients. During this time, we are taking all necessary precautions to screen for coronavirus (COVID-19) and to prevent its potential spread. We continue to monitor the evolving COVID-19 pandemic and are working with experts throughout Emory Healthcare to keep your patients safe. For the most up-to-date information for our referring partners, click here.